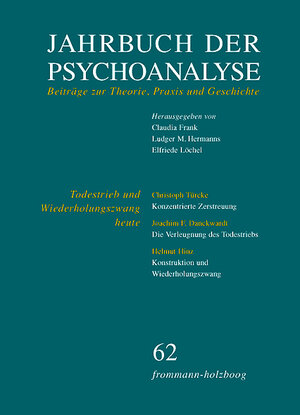 bearbeitet von Claudia Frank, Ludger M. Hermanns und Elfriede Löchel
Since Freud introduced the concept of a death drive in 1920, it seems to have influenced the intense discussion about the phenomena which Freud attempted to express with this. On the one hand, his ideas on this have been expanded and rendered clinically productive, and on the other hand they have been rejected, or in other words a different understanding of repetition compulsion was developed in comparison to that of Freud. This volume sheds light on aspects of the current discussion from various perspectives, for example that of the philosopher C. Türcke, the winner of the Sigmund Freud Cultural Award in 2009 as well as that of the psychoanalyst J. Danckwardt, whose Wolfgang Loch lecture given at the presentation of the Wolfgang Loch Prize in 2010 is reprinted in this volume. Whereas the focus is on theoretical issues in the articles written by E. Löchel and C. Kirchhoff, clinical issues are also in discussed in the articles written by H. Hinz and C. Frank on the basis of case studies. The volume also includes an essay on C. Türcke’s last book, written by E. Th. Haas, as well as the Karl Abraham lecture by F. Busch.