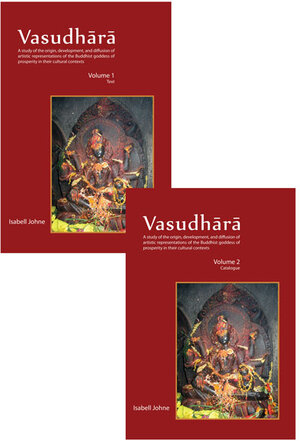 A study of the origin, development, and diffusion of artistic representations of the Buddhist goddess of prosperity in their cultural contexts

The goddess Vasudhara, guarantor of sustenance, material and spiritual prosperity, and good fortune, is one of the most important deities in late Buddhism. This study presents relevant text sources and analyzes the iconographic development of the figure in her narrative contexts and in individual cult images from various regions in Asia during different epochs. Originating from an ancient Indian goddess of the earth and fertility, Vasudhara is the guardian of all precious treasures and is called upon for a good harvest and long life. She was first integrated into the legend of Buddha’s life as witness to his enlightenment, which was reflected in the painting and sculpture of India and Central Asia from the second century onward. Around the ninth century Vasudhara became an independent goddess in Vajrayana Buddhism. Her cult spread to the culturally Indian neighboring regions of Nepal and Tibet. Vasudhara took on a regionally particular form in Southeast Asia. The goddess is still depicted today in stone, metal, and wooden sculpture, as well as in traditional scroll painting and book art. In Nepal she is the focus of an animated cult. Her cult images, sanctuaries, and rituals are part of the Newar culture’s complex religious and social system. The goddess’s presence spanning some two thousand years implies both her continuity as well as the ever-shifting meaning of her aspects, functions, and affinities to other gods in various cultural and religious contexts. Nevertheless, the fulfillment of man’s fundamental needs – sustenance, wealth, success, and good fortune – has remained her most important function into the present day.